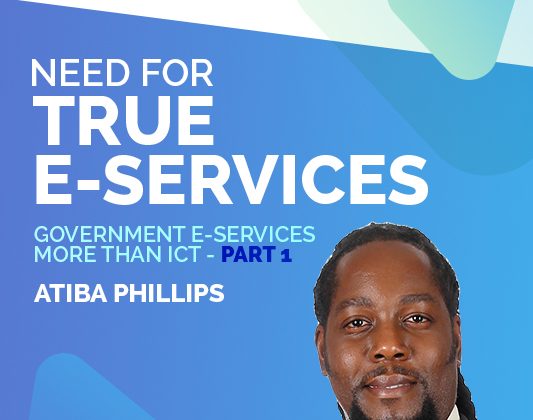 Launched in 2007, ttconnect is the name given to the multi-channel government service delivery structure of the Trinidad and Tobago government which has as its motto, “Government at your Service”. At its inception, ttconnect was intended to be the “common counter” initiative of the Government – the single face of Government to the citizen. The initiative was developed with a number of objectives including:

some 13 years reveals some of the key issues and challenges which militate against the initiative attaining its full potential.

The term “e-Services” is generally used to describe the provision of services via the Internet. Indeed the term Government e-Services usually conjures up the image of fast, on-line processing of submitted requests, wherein the back-end service processing is automated and seamlessly routes the required information across Ministries or Government Agencies as needed, to give the user a semi-immediate and transparent experience.

Such Service initiatives are normally touted to enable the separation of the citizen-user from the poor customer service or bureaucratic manual procedures that have been traditionally associated with Government operations. Finally, many government e-services, though not considered commercial services, do contain a payment component.

Using this standard, the vast majority of the Services which are offered via ttconnect do not qualify as full e- services. This is because there is:

Even though the technical ability to send and receive payments on-line has been implemented in recent years, ttconnect is constrained regarding the new services that it can on-board due to inadequate legislation and institutional arrangements, which renders ttconnect unable to receive monies on behalf of Government Ministries and agencies as a default matter.

Many popularly demanded services, for example payment (beyond filing) of taxes, cannot be currently facilitated through the ttconnect infrastructure. This is likely a key contributor to the reported decline in demand for the Government services offered through ttconnect’s channels over time (the uptick in enquiries during the recent months of the pandemic notwithstanding).

While the ttconnect Portal (www.ttconnect.gov.tt) is reputed to have information on over four hundred (400) different Government services, only about 46 services are available through the ttconnect Service Centres and Express.

ttconnect can only offer services based on collaborative MOUs which it signs with the Ministries from which the Service originates. However there is no mandate for collaboration.

Unwillingness on the part of certain Ministries / Agencies to leverage the ttconnect multiple channel infrastructure continues to undermine the effectiveness of this venture – which was intended to be the single face of Government to the citizen.

Further, due to its status as a State Enterprise, the CEO / Board of iGovTT has no compelling authority over Ministries to ensure that they put the relevant measures to support this “one government” approach to the delivery of citizen services.

Lessons to be Learnt

ttconnect has been one of Government’s umbrella initiatives for facilitating citizen access to public services in a way that is significantly more convenient than what has traditionally obtained. The successes and limitations of this venture should be well studied as the new Government signals its intention to push once again a national digital transformation agenda.

This is Part 1 of a five-part series in which we investigate the national e-services infrastructure of Trinidad and Tobago, specifically ttconnect, to draw out the pros and cons, successes, and areas for greater attention.

Future editions in the series will dive deeper into the analysis, and draw out conclusions and recommendations relevant for any emerging economy-state seeking to build-out a national /citizen e-services framework.