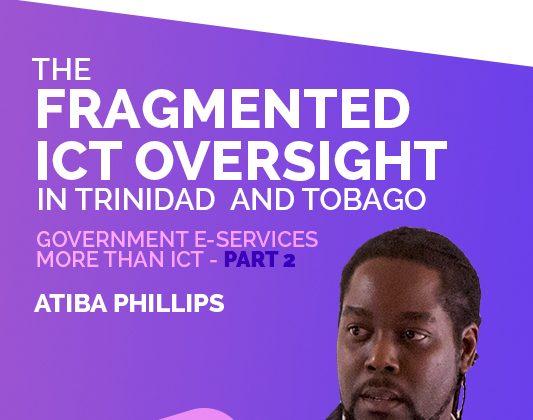 A 2009 Ministry of Public Administration (MPA) report speaks of ttconnect – the umbrella Government e-services project – as follows: “[the initiative] served as a first step to realizing the concepts of Integrated Service Delivery and ‘No wrong Door’ delivery of Government Services in Trinidad and Tobago”.

A senior ttconnect representative states that, “ttconnect needs to be that buffer to protect the citizen from the runaround. ttconnect can take the headache on behalf of the client rather than the citizen keeping track of changing portfolios of Ministries.”

With the motto “Government at your service”, ttconnect is a statement of intent by the Government of Trinidad and Tobago to put the citizen first.

In Trinidad and Tobago [as in other countries around the world], access to Government services and the ICT savvy in rural populations tend to be lower than in their urban counterparts. In this regard the ttconnect Express Bus service, which combines an ICT driven back-end with a mobile service unit (Bus), is conceptually well designed. Personnel on the service bus help the citizen navigate both the technology as well as Government bureaucracy, thus making Government services more accessible. As such, conceptually, the multi-channel architecture of ttconnect has many of the characteristics of a best-practice offering – catering for the different intended target markets for Government Services.

Additionally, there are also other mobile Bus Units branded with individual Ministry branding [e.g. the Job and Career Coach Bus of the former Ministry of Tertiary Education and Skills Training] which also go out to rural communities to deliver Ministry information and services. Kiosks have been deployed by the Ministry of Labor to deliver labour-related information to citizens, while the ttconnect sponsoring Ministry itself – the Ministry of Public Administration – at one point had separately put on its “one-stop-shop” Government service initiative (circa 2014). These and many others over time, represent both a duplication of infrastructure and Government fragmentation from the view of the citizen.

Interestingly, the Ministry of Science and Technology – another former parent Ministry of ttconnect – was at one point on a drive to rollout “Community Access Centres”, through an initiative branded “Star.tt”. One of the main attractions of these Centres was the ability to access Government Services on-line. These centres were targeted for rollout in rural areas and, at one point, forty-four (44) centres were earmarked to be built.

A 2014 World Bank Report on the Trinidad and Tobago ICT Sector stated that “The policy-making function for the ICT sector in Trinidad and Tobago is very fragmented, as it is currently shared among multiple ministries and agencies, with a weak coordination mechanism in the form of an ICT Inter-Ministerial Committee”.

Despite the intent by the Government of Trinidad and Tobago to put the citizen first at the declarative and conceptual-level, it is clear that the objectives and target populations of these various initiatives overlap with ttconnect service channels and serve to undermine its effectiveness.

All of the above factors re: channel duplication, initiative proliferations and policy vacillation over time regarding the governance of ICT and e-Service matters, promote confusion in the minds of citizens as to where and to whom they should be looking to access Government information and services. This confusion reduces the overall effectiveness of all programs and militates against ttconnect’s original aspirations to insulate citizens from the vicissitudes of government portfolios and make life easier for doing business with Government.

This is Part 2 of a five-part series in which we investigate the national e-services infrastructure of Trinidad and Tobago, specifically ttconnect, to draw out the pros and cons, successes, and areas for greater attention.

Future editions in the series will continue dive into this analysis, and draw out conclusions and recommendations relevant for any emerging economy-state seeking to build-out a national /citizen e-services framework.

Part 1– The Need for True e-Services