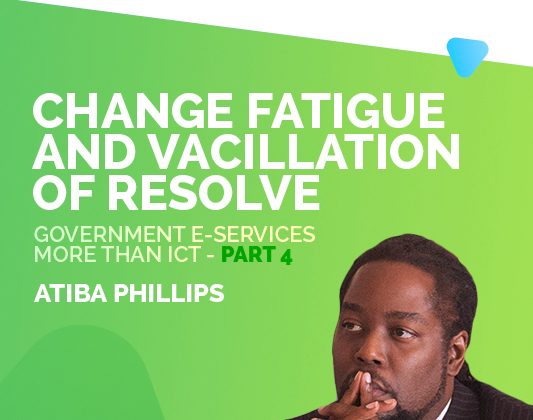 Finding a Place for ICTs

If we think of traditional economic sectors, such as Health, Finance, Agriculture and Education, we will find a corresponding Ministry and agencies overseeing that sector which have been fairly stable over time. However, for ICTs – certainly in Trinidad and Tobago – this has not been the case.

The responsibility for ICTs – inclusive of the various aspects such as telecommunications, e-business/ e-commerce, e-Government and e-Services, innovation and R&D as well as digital divide type issues – has been scattered across a miscellany of different Ministries and agencies, the composition of which changes both across administrations and even within 5-year political cycles. This level of disintegration and turbulence in ICTs at the national level, has caused much injury to the potential success of e-services initiatives which, by their very nature rely on cohesion and coordination of activities.

Specifically focusing on the Ministerial guidance to ttconnect, since the transfer of the ttconnect Unit to iGovTT in 2010, we see that the Minister responsible and the host Ministry for the National ICT mandate has changed hands several times. Indeed, within the space of thirteen (13) months (June 2011 to July 2012), the host Ministry changed from the Ministry of Public Administration (MPA), to the Ministry of Science, Technology and Tertiary Education (MSTTE) and then again to a newly created Ministry of Science and Technology (MS&T) – four Ministers and three Ministries, all in just over a year.

In all, there have been nine (9) different Ministers [ ten (10) if we count the current junior Minister in the MPADT ] and six (6) different Ministries (or versions of Ministries) in charge of the NICT company which houses the ttconnect Unit in the past eleven (11) years. This represents an alarmingly high level of turnover in leadership which likely also represents a level of operational tumult and lack of consistency in the directives given to the company.

Diffusion of Conviction Over time

Cabinet is collectively responsible to Parliament “for the general direction and control” of national affairs in accordance with Section 75(1) of the Trinidad and Tobago Constitution. Cabinet Minutes are official documents which constitute the legal authority for the disbursement of the National Budget. These Minutes have the status of executive fiat, rules and regulations. Cabinet’s rule-making capacity, in-effect, results in quasi-laws, which are binding on all Ministers and Ministries within the Westminster system of Government.

However, notwithstanding the fact of various Cabinet Minutes authorising the establishment of the ttconnect initiative, and subsequent Cabinet Minutes placing this all-encompassing ICT remit within the auspices of iGovTT, there have been other Minutes, coming from successive Governments which authorize seemingly conflicting initiatives – with significant associated expenditures – which go contrary to these original intentions.

It should also be noted that, as a Company under the Companies’ Act, iGovTT, the agency that hosts the ttconnect Unit, does not have direct access to Cabinet, and must liaise through a host Ministry / Minister. Particularly when the NICT portfolio gets assigned to a new Ministry with no history of managing the national ICT function, decisions are made and directives given to the Company by the Ministry staff who would not have had background and experience in this area. Decisions and directives given in this context, are at far greater risk of going against long held philosophical frameworks and established conventions arrived at over time.

These realities collude to diminish the integrity of the idea of presenting a “One Government” face to citizens by streamlining all government services through a single [though multi-channel] mechanism – such as ttconnect. This vacillation is a key a source of the dis-integration and fragmentation which is seen from the eyes of the citizen.

Lessons to be Learnt

As digital becomes more of a key economic and strategic sector for any country, Governments will have to update the priority which they associate with the issue of ICT and its supporting elements at the national level.

One of the key features of this review of the ttconnect initiative is the significant, and fundamental changes in leadership personnel which the initiative has faced over its lifetime.

Significant and consistent changes over time lead to “change fatigue” on the part of technical project personnel.   In such an environment, even dedicated, knowledgeable and experienced ICT and e-Government personnel may leave the organisation after the sand shifts under their feet for too long. Such a situation inevitably leaves the project exposed to timeline set-backs, loss of institutional memory, loss of enabling external relationships and sometimes good-will; all culminating in increased project risk.

Further, the foregoing analysis suggests that conviction at the Cabinet level on the need to streamline national ICT governance and the delivery of Government e-Services is a key factor which must be addressed for initiatives such as ttconnect to be successful. Beyond the technology, project management or operational efficiency, the collective will of the Government is a determining factor for such ambitious endeavors.

Somehow, nations will need to get sufficient cross-partisan buy-in on fundamental ways forward for ICTs, such that these projects are insulated from the sometimes crippling set-backs that may come from an ever-changing political environment. One of the possibilities in this regard is to reduce the political influence over the body tasked with overseeing execution. Keeping consensus on ICT priorities and governance will be a key point to address for Trinidad and Tobago, and all governments attempting such ambitious and broad-scale initiatives.

This is Part 4 of a five-part series which has been investigating the national e-services infrastructure of Trinidad and Tobago, specifically ttconnect, to draw out the pros and cons, successes, and areas for greater attention.

Part 1– The Need for True e-Services